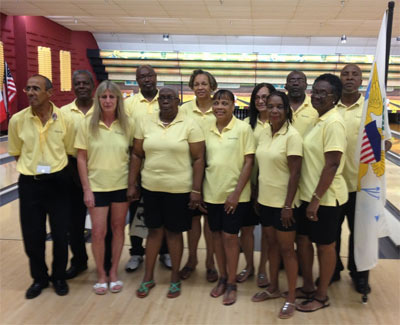 Twelve of the top senior men and women bowlers from the VI competed and won 16 medals at the World Senior’s Invitational in Ft. Lauderdale, Florida, May 7th-12th, which hosted bowlers from 7 countries including Italy, Brazil, Ireland, Bahamas, France, USA and the VI. The VI team on 16 medals which beats last year’s record of 12 medals.

In the women’s competition, though new to international competition, the team of Ernestine Canton and Sabrina Hodge won the only gold medals for the VI. Their efforts in the Women’s Doubles competition bested the team of Cathy Matthews and her Italian partner, who took the silver.  Last year’s champs Terri Depka and Winona Lester finished with the bronze.

Cathy also went on to win a silver medal in the Women’s Trios along with her partners from the USA and Ireland. The team of Terri Depka, Sabrina Hodge and Ernestine Canton took the bronze.

In the men’s competition, Nemecio Camacho, Jr., won the only VI Singles medal for the men with a silver. Camacho, Jr., also won a silver medal in Doubles with his partner Vernon Browne. Hugo Moorehead shot an impressive 298 game, tying the high game of the tournament, and along with his partner, Valencio Jackson took home the Bronze in Doubles.

The team of Browne, Camacho, Jr., and their partner from the USA won the silver in the Men’s Trios.

The World Senior’s Invitational is an annual tournament which hosts bowlers over the age of 45 for women, and 50 for the men. The VI has been one of the dominant teams all 3 years since the tournament began in 2010.

The next tournament for the VI team will be July 28th-August 4th at the Tournament of the Americas in Ft. Lauderdale. This will be the 50th Anniversary of the tournament and over 180 bowlers from North America, Central America, South America and the Caribbean will be competing.