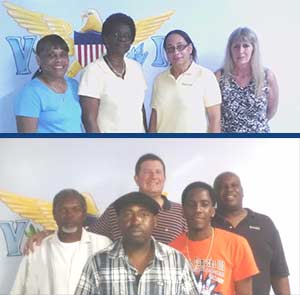 The top 6 male and top 6 female bowlers were selected on October 13th at Tropical Ten Pins in St. Croix, to represent the Virgin Islands at the Concecabol tournament in Cali, Colombia, May 18-26, 2013

The bowlers participated in an 8-game roll off, with the highest pin total determining the winners.

In the women’s division, Terri Depka came out on top followed by Mercedes Petersen, Sheryl Williams, Sabrina Hodge and Ernestine Canton. Winona Lester will serve as the alternate. This is a strong women’s team as almost all have been medal winners in international competition.

In the men’s division, Ronald Osborne finished in the first position followed by Ronald Moorehead, Edmund Ferrol, Al Baptiste and first time qualifier, David Johnson. Raphael Bramble finished as the alternate. The men’s team will be strong as well due to international competition experience.

The 2013 Concecabol tournament is the qualifier for the 2014 Central America and Caribbean Games.