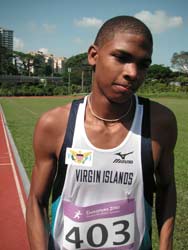 Brigitte Ramussen swam the 100 butterfly an was first in her heat but did not move on into the finals. She was chosen for a random drug test which is another unique experience. Javier Martinez from the Basketball team got to experience that after the teams first win.

David Walter ran the 400M His first 100 were the fastest of anyone racing but he could not keep it up and finished off his best time.

IOC President Jacque Rogge said at the Opening Ceremony that there is a difference between a winner and a champion. “to win, you merely have to cross the finish line first. To be a champion, you have to inspire admiration for your character as well as for your physical talent” well David Walter did that for me yesterday. One of his fellow competitors did not have spikes for the 400M. So David without hesitation gave him one of his pair so that he could participate having the same advantage as the rest of the field. David will run again on the 21.

Sailing got there first races under their belts. Ian Barrows was over earlier in the first race and got a 5th in the second. Cahllis Diaz was in the middle of the fleet in both of her races. The sailors are scheduled for 2 or 3 races on the 18,20,21 23, 24, & 25.

Basketball was in town for a free throw shoot out when a very heavy thunderstorm dropped a huge amount of rain that caused the tent to collapse ad knock over dozens of people will find out more about that later.