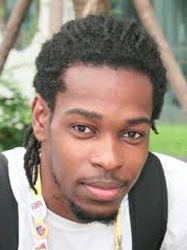 The 2012 Olympic Games in London are only five months away and U.S. Virgin Islands track standout Tabarie Henry continues to turn heads on a global stage.

The St. Thomas native was in Istanbul, Turkey, for the International Association of Athletics Federations World Indoor Championships on Friday, and he advanced to today’s final in the 400 meters.

“Tabarie is the first V.I. national team member to advance this far in the competition,” USVI Track and Field Federation general secretary Wallace Williams said Friday. “He has only run a couple of indoor 400-meter races this season, but looks to be a medal contender.”

In his very first appearance at the IAAF World Championships, the 24-year-old Henry clocked a time of 46.01 and took second to the Bahamas’ Demetrius Pinder – Henry’s former teammate at Texas A&M University – in the first of three semifinals on Friday.

Henry’s time was actually tied for the second fastest of each of the semifinal races. Pinder ran a 45.94, and defending champion Chris Brown of the Bahamas came across the line in 46.37 to win the second semifinal.