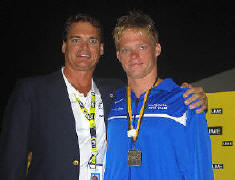 “After getting touched out by less than a tenth in the 200 IM by the guy who he beat in the 400 IM, Bryson got a little angry and dropped four seconds off his best time in the 200 Butterfly to win another silver medal for the evening,” said the V.I. Olympic Committee’s Jodie Mays, who was in Barbados to watch her son Bryson, and younger brother, Matthew, compete against the best.