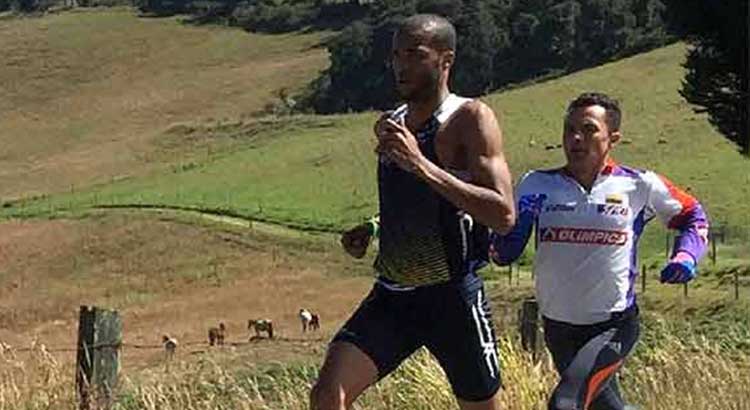 Juan Robles (in dark uniform) the top long distance road runner in the Virgin Islands and track coach at the St. Croix Central High School has been awarded a training grant for high altitude training in Colombia, South America for the summer. He joined some of his college teammates when he was a student/athlete at Turabo University in Puerto Rico at one of the Olympic Training Centers in Colombia situated at over 6,000 feet and ideal for long distance training.

The VITFF granted Juan a training grant for the purpose of both assisting with further developing his running capability and for making it possible for him to gain valuable technical and philosophical training in the theoretical and practical aspects of high altitude training for use in his capacity as a coach of distance and long distance runners (Juan received his IAAF Level I Coaching Certification last year).

While in Colombia, Juan was granted permission (a requirement of host country’s national track and field federation) of VITFF to compete in the Palmira Half-Marathon (at over 3,000 feet) where he ran the race in 1:13.41 for eighth overall and in his best time since he was a college runner and the best time for a V.I. runners in the past several years.

Robles has won the V.I. Half-Marathon champion for the past five years.  His best time in the race was 1:14 when he was running for Turabo Univ. back in 2010.  His 1:13 is the best time run by a Virgin Islander since the days of George Jules, Calvin Dallas, Marlon Williams, Wallace Williams.  Danny Dickinson has the V.I. record for the half-marathon  run in the 90’s when he ran a 1:10 on a St. Croix Course.  The fastest half-marathon ever run in the Virgin Islands was 1:06 by Douglas Wakihuri in 1998 when V.I.Pace Runners organized the race from Beeston Hill to Fort Frederik to recognized the Emancipation of Enslaved Africans in the West Indies which took place at the finish line of the race.