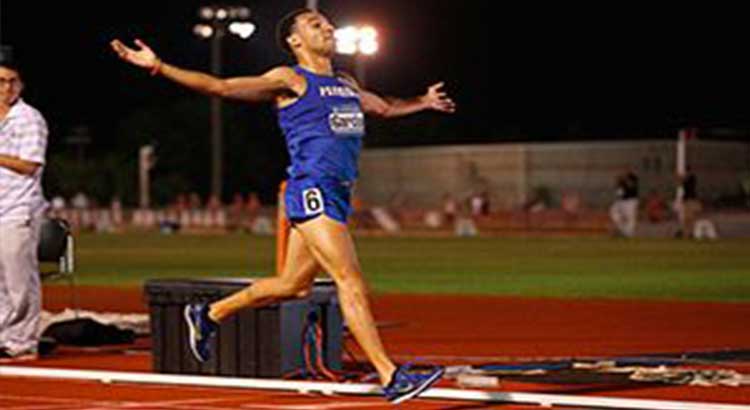 The Virgin Islands Track and Field Federation announced today that Eduardo Garcia won the Southeastern Conference Championship in the 10,000 meters at Mississippi State University in Starkville, Mississippi recently. His time was 29:49.92. He is the first Virgin Islands long distance runner to win a major NCAA championship at the distance and the V.I. national record holder for the distance at 29:36.26.

Garcia made his debut as a V.I. National Track and Field Team Member in last year’s CAC Games in Vera Cruz, Mexico  and had the best ever V.I. performance by a Virgin Islander in the 10k with a strong fourth place finish behind the dominant Central Americans and just one spot out of the medals.  The junior at NCAA powerhouse the University of Florida impressed his coach Mike Holloway with his performance… “It’s an unbelievable accomplishment for Eddie (Garcia). You’re talking about a guy that really comes to work every day and does what we ask of him. But that was still a big surprise for everyone. Words can’t explain how proud I am of him…

On getting stronger as the race progressed:

“Garcia said “Our race plan was to keep myself in position the entire way. Also, we’ve been doing a lot of speed work, Jimmy (Clark) and I, so we both knew that if it came down to the finish then we’d be alright.”

On the final two laps of the race:

“With just those couple of laps left, I was just trying to score as many points as I could for the Gators, you know? This is the SEC Championships and I just ran with my heart during the end of the race. It was just all heart.”

Garcia is the second V.I. Track and Field National Team member to excel at Univ. of Florida at the championship level joining Eddie Lovett 110m hurdles as SEC Conference Champion. He is gearing up for the NCAA Regional Championships coming up this weekend and ideally the NCAA Championships to follow.  His next competition for the Virgin Islands National Track and Field Team will be The Pan American Games in Toronto in July.

Wallace Williams, General Secretary VITFF on Garcia’s performance at Starkville…”the track in Starkville is good to the Virgin Islands.  Several years ago, I had the opportunity to see our Billy Bohlke run personal best there in the SEC Championships when he was a senior and top distance runner at LSU.  Eduardo is in fine company, only a few Florida Univ. distance runners have achieved what Eduardo did there, he can count himself among that group which includes the great Olympian and Florida Alum, Frank Shorter, among others.  We are happy for Eduardo, we are proud of him.”