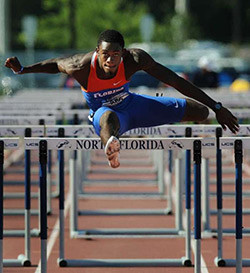 Eddie Lovett, a junior at the University of Florida is in the ranks of all-time great Virgin Islands track and field athletes (pending).  On Saturday he won the NCAA National Indoor Championship 60m Hurdles with a time of 7.50 ranking him at number two on the IAAF World Ranking.  His performance adds to his career honors including: four-time NCAA All-America, two-time Southeastern Conference 60m hurdles champion, SEC Men’s Indoor Freshman Track and Field Runner of the year, 2011 First Team All-SEC (Indoors and outdoors), All-SEC (First Team Indoors, Second Team outdoors).

In his short career, Lovett gained fame as a high school track star in Florida and the winning the 2010 state championship in the 110m hurdles and became the   state record holder in the event. His 2010 time in the event was the fastest in the USA, the fastest in Florida high school history.  As a freshman he won the Pan Am Junior Championship in the event and set a record of 13.14, breaking the previous record by an astonishing .30 seconds!  He was the youngest competition in the USA Olympic Trials in 2012 advancing to the semi-finals.

“Eddie is the kind of guy where he could have a perfect start and still say it wasn’t,” Florida Coach Mike Holloway commented. “ What I’ll tell you is watching his transformation…it’s always great when you can break that ice and watch him come around. He broke our school record, he’s one of the top five guys in the history of the event, the NCAA meet record holder and he’s been focused like this since August when he started. I’m extremely proud of him.”

“I felt pretty good,” Lovett said. “Yesterday, I just wanted to work on my start. I made it up in between the hurdles, and I did the same today. It wasn’t the best start like I wanted, but I made it up at the end. I’m just happy. If I got my steps and technique right, it would all fall into place.”

2] Lovett has applied for a transfer of his eligibility from the USA to the Virgin Islands and plans to represent the Virgin Islands in international competition including: The IAAF World Championships, The CAC Games, The Pan American Games and the Olympic Games.